A Tale of Two Shoes 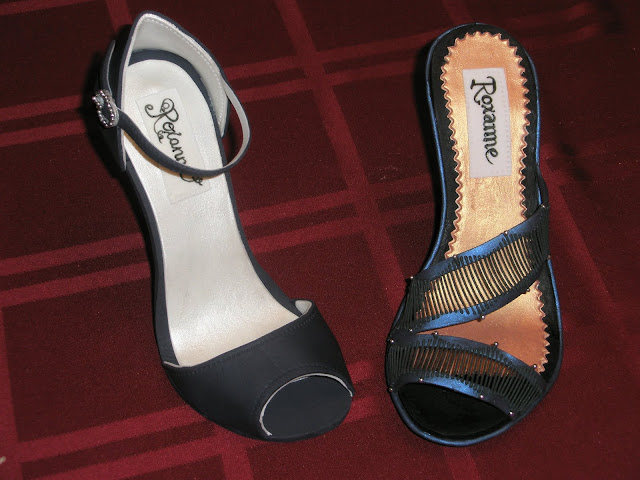 These two sweeties are all dressed up with nowhere to go.  These gumpaste stilettos were to be two of 3 individual shoes featured on a cake that I was going to make for a local competition at the end of June.  However, that competition got canceled and rescheduled for September 12.  I don't think I'll be able to save them for that long-- although I don't expect anyone to actually eat them, they're kind of delicate.

So please, my wonderful readers, enjoy their stories.

The shoe on the right you should recognize from my previous post.  It's just been dressed up a little. :) 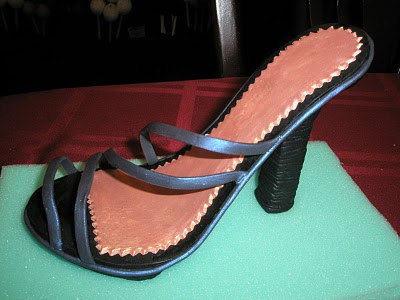 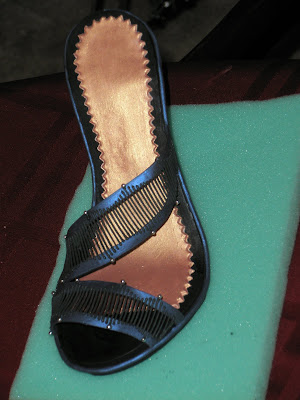 To my knowledge, I haven't seen anyone else use stringwork on a gumpaste shoe.  Each little string was hand piped in black royal icing using a PME tip 1.   For more information on stringwork, you should really check out the fabulous tutorials being posted at Mel's Cake Walk.
Some specific notes on this-- I used royal icing made from pasteurized egg whites instead of meringue powder.  This makes the icing easier to work with and it dries stronger.  I also used the PME tip rather than a Wilton tip.  I recently invested in a set of 20 PME tips

.  I bought these for a couple of reasons, not the least of which is that they are seamless, which means your icing is less likely to kink while you're stringing.  Additionally, the set comes with round tips 0 and a tip 00, and a tip 1.5, none of which are available in the Wilton line.
FYI, I own the Wilton Master Tip Set

which is generally great, and I've bought several other individual tips and acquired yet others from class kits. 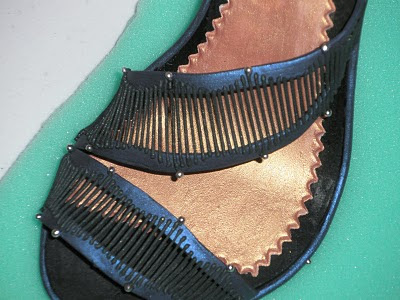 After piping the strings, I added little dragee accents at the points.
Finally I added my own little signature label: 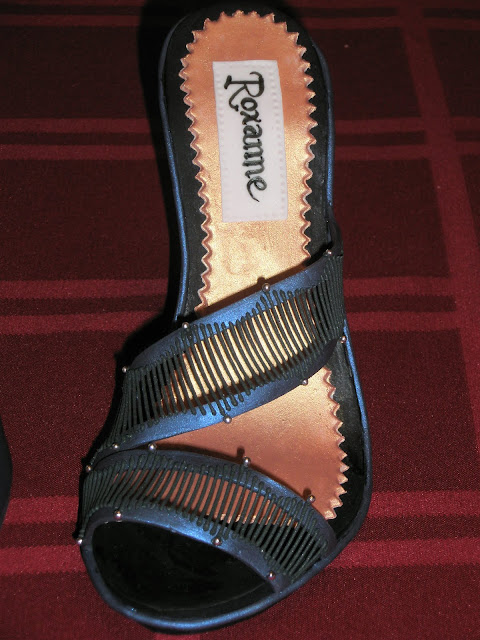 Now let's talk about the other shoe, which is legitimately a stiletto heel: 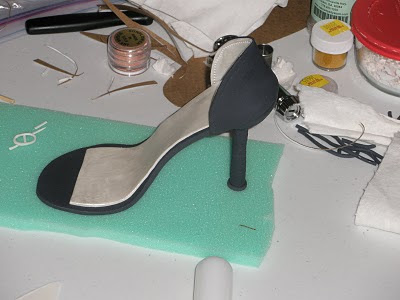 I made the heel by cutting out tip 12 circles from 1/8" gumpaste and carefully stacking them over a skewer.  I then custom molded a top piece to fade between the sole and the skinny heel.  For the back of the shoe, I made myself a cardboard pattern and cut it out from both white and black gumpaste and added some stitching in the white layer.  I attached it to the dry sole using tylo glue. 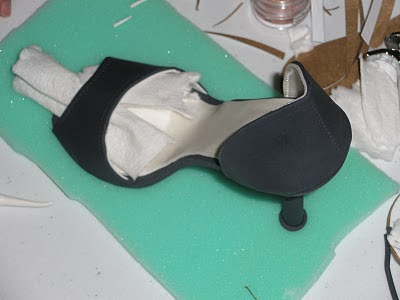 I did something similar for the toe piece, which you can see drying supported by paper towel.  I keep the shoes sitting on that green foam so that the bottoms still get air exposure. 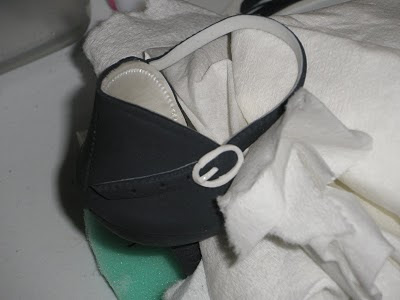 The floating ankle strap was challenging to attach-- it takes the tylo glue a little while before it firms up.  Once it did, I supported the strap with paper towels.  You can see the stitching and little holes in the floating strap, as well as a gumpaste buckle. 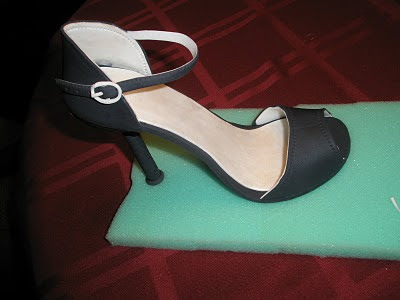 The inside of this shoe was painted with white sparkle luster dust to make it look more like satin. 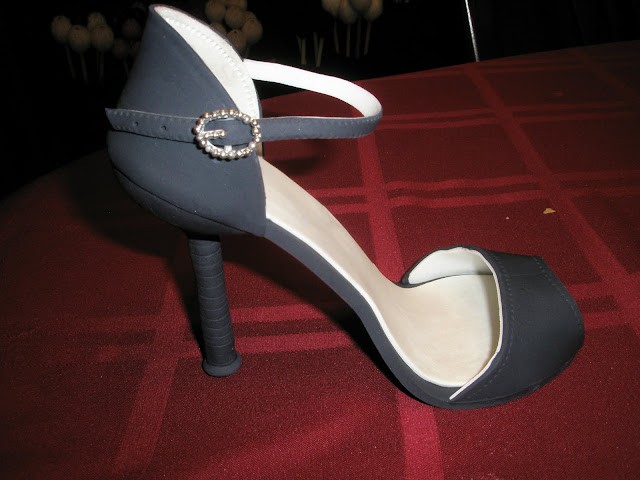 La
To give the shoe a really classy look, I added silver highlighter and 2 mm silver dragees to the buckle as though it were covered in crystals. 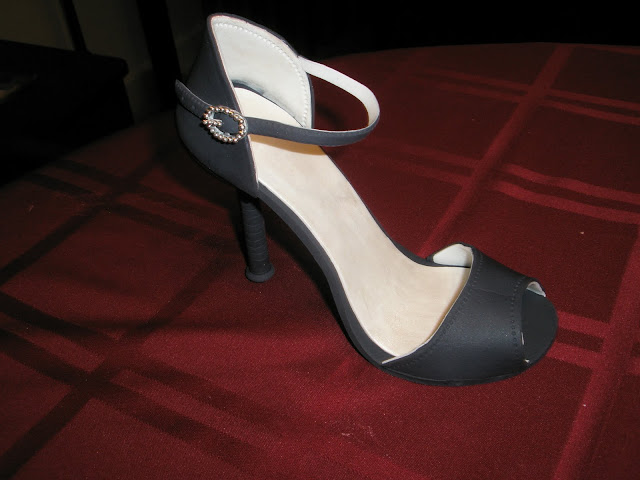 Lastly, I added a signature label. 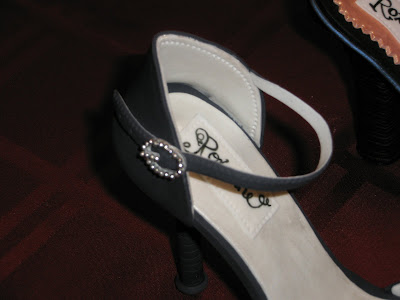 You can't have couture without a label, right? :) 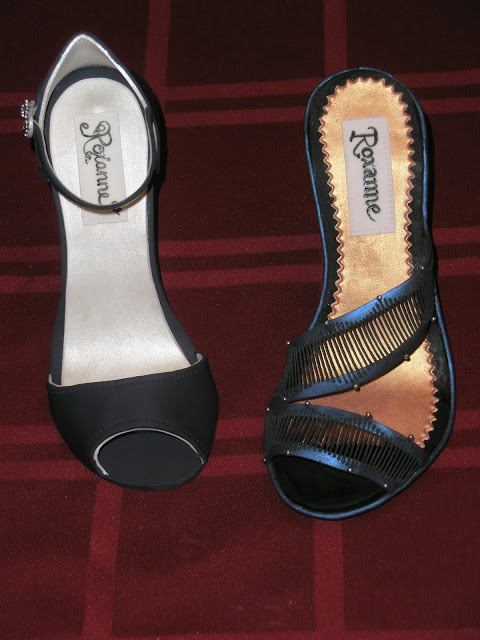 It's a shame that the show got canceled, but I've learned a lot making these shoes.  First lesson-- go after every last little detail.  Even in looking at how the pictures progress, every time I added a detail, it took the work to a new level.  I also developed some useful patterns that I can use in the future, as well some techniques for heel construction and even incorporating stringwork.

I don't know yet if I'll use my same design concept for the show in September... we'll see. :) 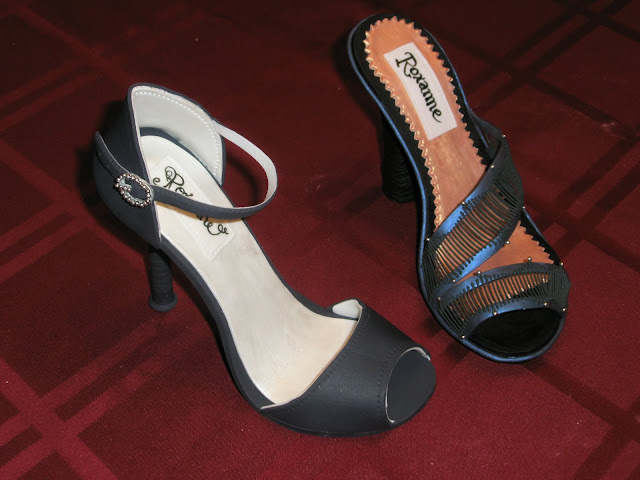