So we established in Part 1 that I decided to embrace the crazy and make my own wedding cake.

Being a cake engineer, I had to carefully define the problem: to design a cake whose execution would not preclude me from taking care of my bridal responsibilities.

Those of you who have gotten married know that the week of the wedding is, shall we say, hectic. 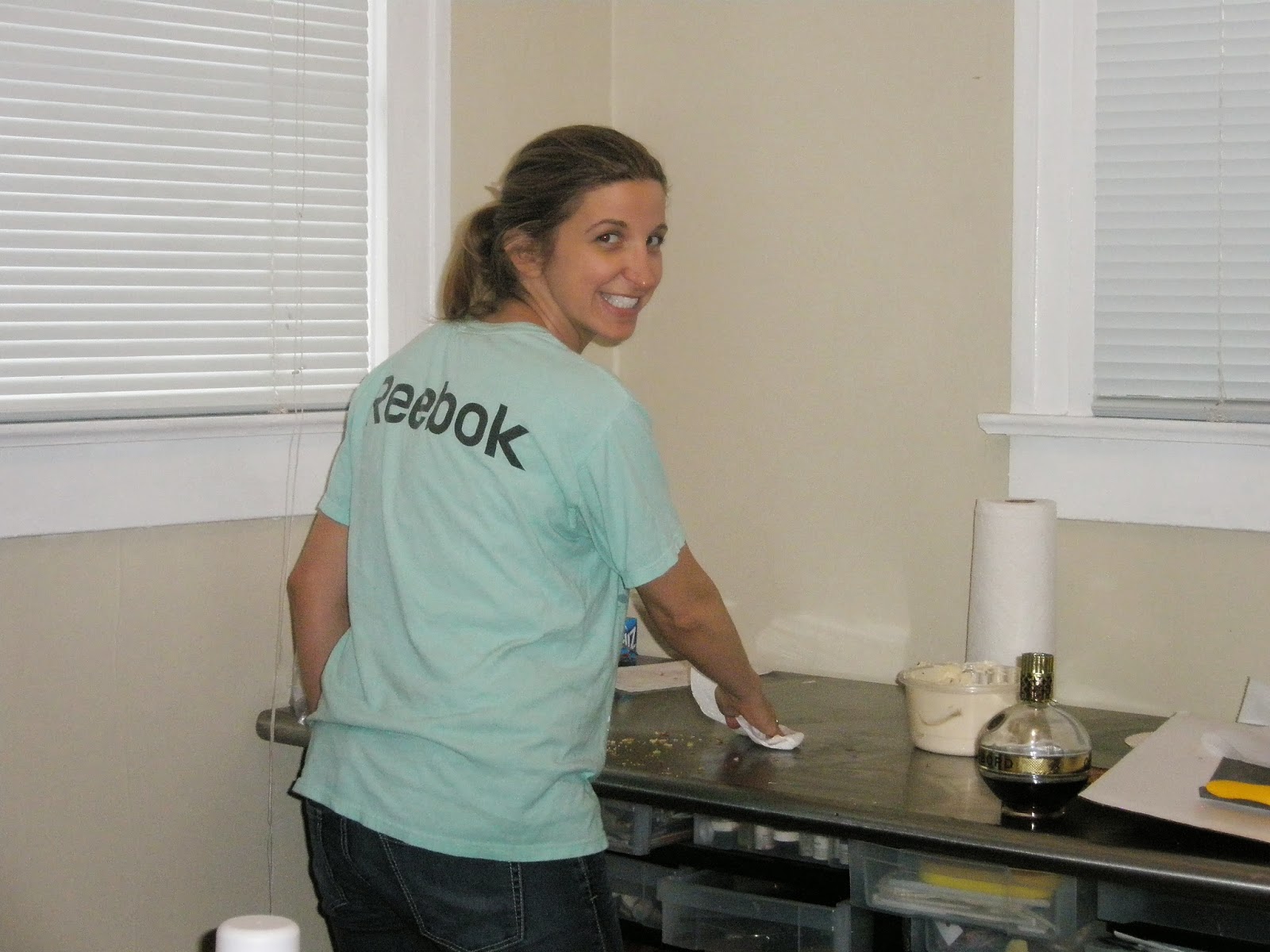 How glamorous is this?  This could be you, covered in buttercream at T-6 hours!

I learned a lot last year when I did Lindsey's cake while being her bridesmaid. I had thought through the day of the wedding pretty carefully-- when I would set up the cake, go to hair and makeup, get dressed, etc., but I had forgotten about the day before the wedding.

Ah yes, the day before the wedding you have a rehearsal and a rehearsal dinner (doesn't that sound like practicing before you actually eat dinner?).  Ostensibly, you ought to show up to the wedding with your nails painted and not covered in green petal dust.  Details.

In planning out my own wedding week, I tried to take the following into account:

On the wedding day:
Day before:
Day before that: Dinner with both sets of parents (they hadn't met each other yet), accompany then-fiance to a work function

Other miscellaneous to-do items for that week: Make sure dress is steamed and ready, get programs and such to venue, write out escort cards, spray tan, etc.

This all amounts to some significant constraints.  First, I realized the cake needed to be 'done' and in the fridge on Thursday before dinner.  There wasn't really any time to work on it on Friday. Second, I needed a design that could be delivered and set up easily-- nothing complicated.  I wanted no more than 20 minutes or so of setup so I could be getting ready with my girls. :)

On the upside, I was getting ready at the venue which meant that once the cake was set up, I could just run upstairs and join the beautification team.  That made things easier.

I delegated tasks where I could.  For example, my parents came several days before the wedding and helped with some last minute errands, like writing escort cards and picking up a 22" moving box from Home Depot.  Craig also took on some tasks, like picking up the booze for the rehearsal dinner. 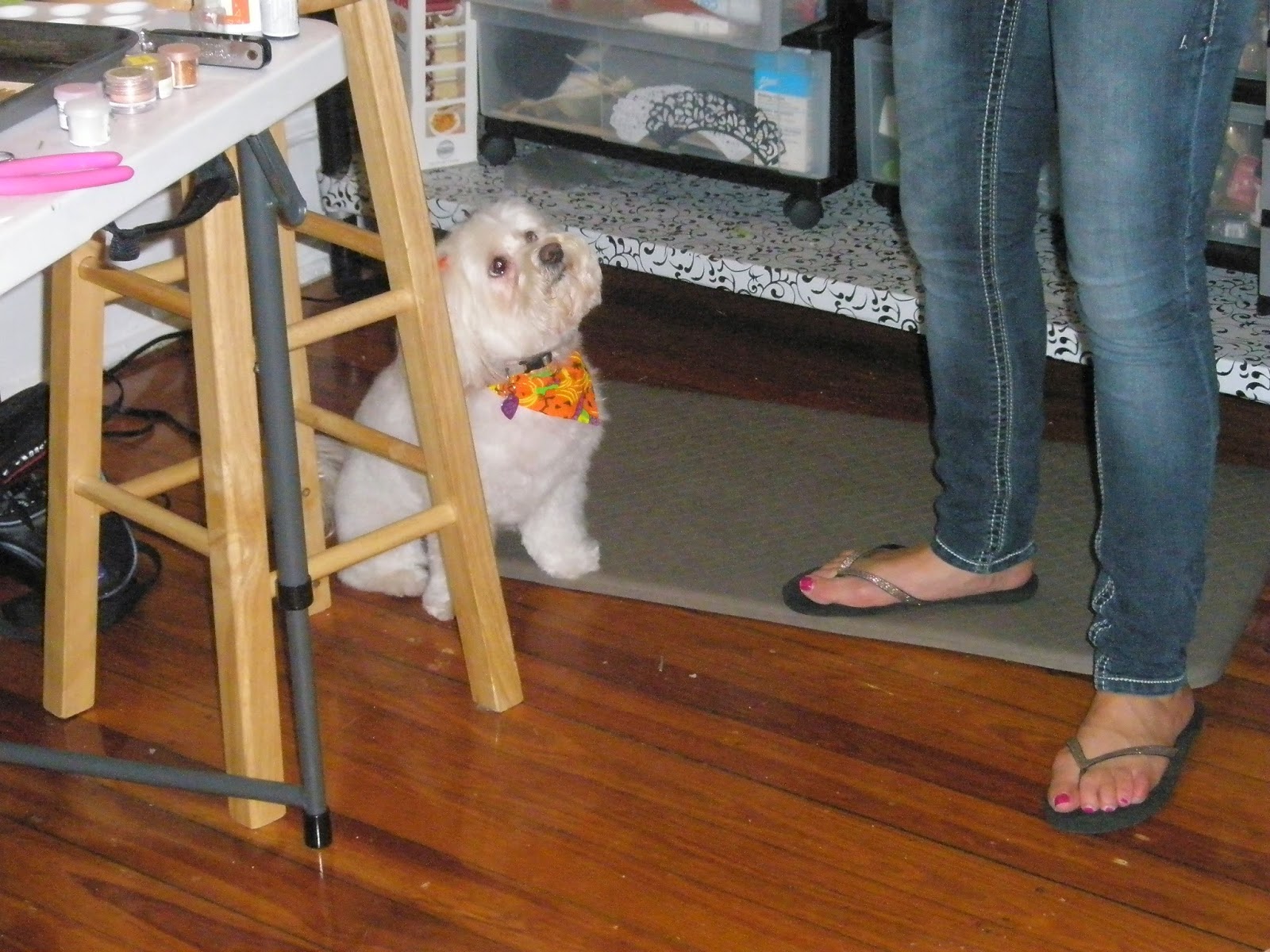 Make sure your support team has their tasks laid out.  Lola's task was to keep the floor clean.

So how does this all translate to a wedding cake design?

I knew I wanted to do a lot of gum paste flowers-- they are kind of my thing, and on top that, they can be made well in advance.  To save on set up time, I thought I'd put them into their own styrofoam tiers and use them as spacers between the cakes. With no pillars/ spacers/ crazy lighting/ decorations that needed to be added on site besides the topper, I knew I could go with most of the cake already stacked.  I would only be limited by how much could be carried safely at one time and how tall of a cake could fit in the delivery car.

I thought I'd start the gum paste flowers no later than May or June for my October wedding.  Then I discovered Game of Thrones, and the whole timeline got a little compressed...

Next post I'll share my original sketch and how it evolved.  Turns out designing a cake for yourself isn't all that easy...

This post is part 1 of a who-knows-yet-how-many part series.

Last September, I got engaged.  We were in Hawaii, and the abbreviated version is he asked, and I said yes.  That was the easy decision.

Then came the real decision.

Our friends would say, 'Congratulations!!  Do you know yet when the big day is?'  (That also was not that hard of a decision.)

Then, to me, 'Are you going to make your own cake?'

At first I emphatically said, 'No!  That would be crazy! The timeline is just not compatible with being the bride.'  To which friends often replied, 'That totally makes sense, but...'  Fill in that ellipsis with one of the following statements:

For the record, none of these statements make the decision any easier (no offense, friends.) ;)

There was no good answer to this question for me, or for them.  And even though I started off by emphatically answering 'no,' I was already waffling on the inside.  For a few months the answer was 'I just don't know yet.  I'm thinking about it.'

Honestly, it was probably a foregone conclusion by the time I booked the venue and catering-- I had already negotiated my cake cutting fee in case I decided I wanted to do the cake myself.  But I at least pretended to waffle for a bit longer.

Sometime during the 'maybe' stage my parents offered the suggestion of designing it myself and/or making my own flowers but having someone else do the actual cake.  I thought hard about this suggestion and then realized this was actually the worst of all possible worlds, not the best.

DaVinci: Hey Pablo! I've got a lot going on these days but I have this vision of a woman maybe smiling and maybe not smiling-- can you paint it for me? K thks bye.

Picasso: No probs, D-Vinc. I got you. 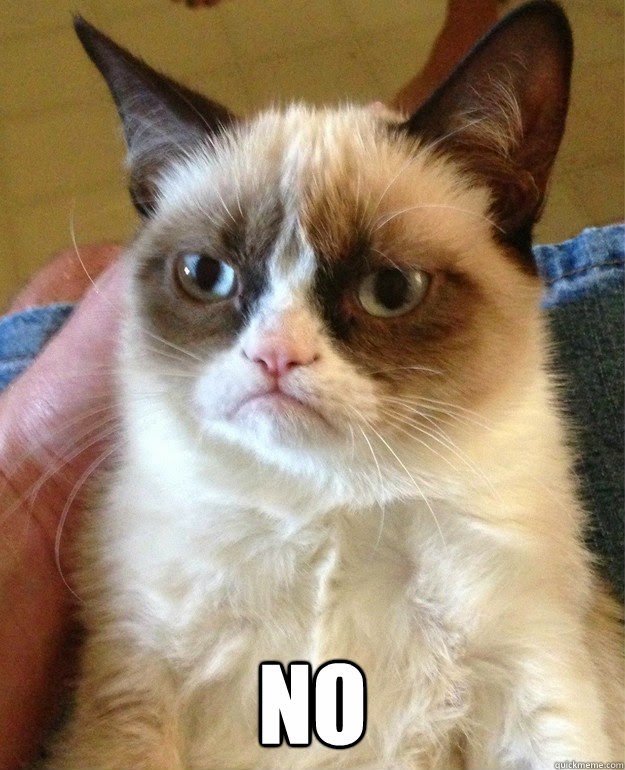 And that's definitely how they would communicate with each other in 2014.

Now, not that I'm comparing myself to DaVinci or anyone else in that artistic echelon, but I think you get the idea about why this would not be good for anyone involved.  I realized that I either had to do my own cake, start to finish, or completely let someone else do it.  It had to be my art or their art, not some uncomfortable melange of the two.

At the end of my probationary waffling period I changed my answer to the question (which was by far the most asked, by the way).  "Are you going to make your own cake?"

I'll be honest, the new list of responses wasn't much more helpful.

A. I think you're crazy.
B. Are you really sure you want to do that?
C. Well, I guess if anyone can pull it off it's you.
D. How is that even possible?
E. No one will care what cake you serve-- make it easy on yourself.

I questioned my decision up till the very end.  I started telling people 'It's a decision I will live to regret either way, so at least I might as well have good cake.'

Well, it was stressful all the way until the day of, but interestingly, I'm glad I did it.

In my next post I'll talk about the planning process for the cake and how I made it fit into a seemingly impossible time frame.

Disclaimer: Do not try this at home.  I would not recommend making your own wedding cake in 99.99% of cases. Remember, I even counseled myself not to. 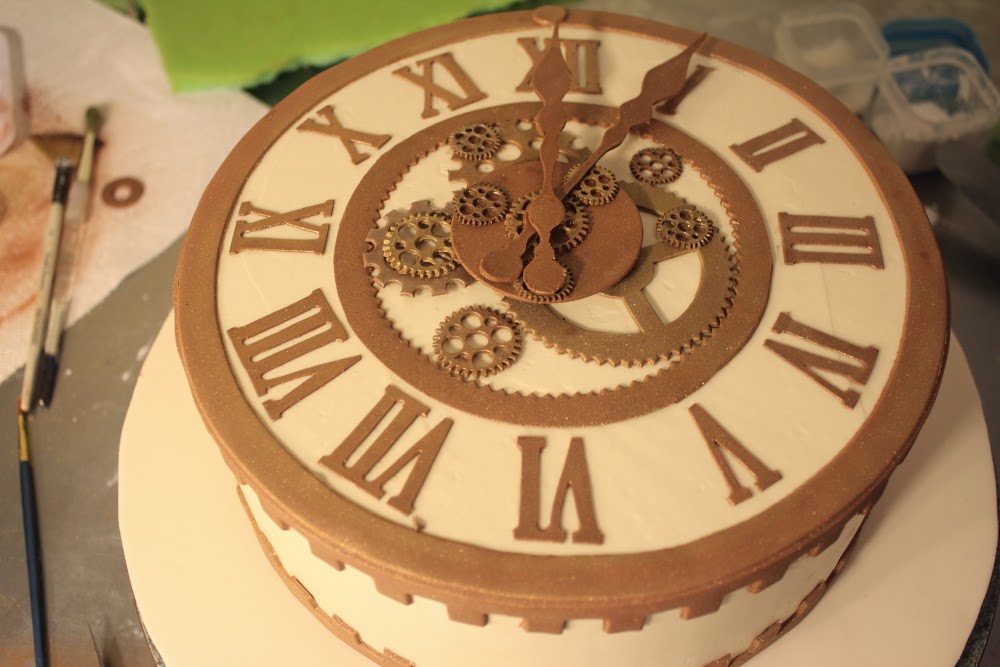 So let me answer the question that I'm sure is burning in all of your minds-- does Roxanne still make cakes??  The answer is sometimes. :)  I work full time and I'm passionate about my job, and I'm equally passionate about my health and life, so squeezing in a 2nd full time job is not really an option right now.  However, when the right opportunities come up, I take them.  And sometimes even the wrong opportunities-- as of now, I'm planning on making my own wedding cake.  I'll keep you posted on all of my bad decisions.

Anyway, a great opportunity came up recently-- my fiance was awarded tenure at Georgia Tech!  I was asked to make a cake for the department celebration.  Since he was not the only one being honored at the celebration, I wanted a cake that was universally relevant for everyone who got tenure.  So I came up with the idea of making the 'tenure clock'-- it is a metaphorical thing that many professors allude to during their early years as faculty members when they only have limited time to prove they are worthy of tenure!  Since we are both in the mechanical engineering department, I thought a steam punk clock in the Georgia Tech white and gold color scheme would be perfect. 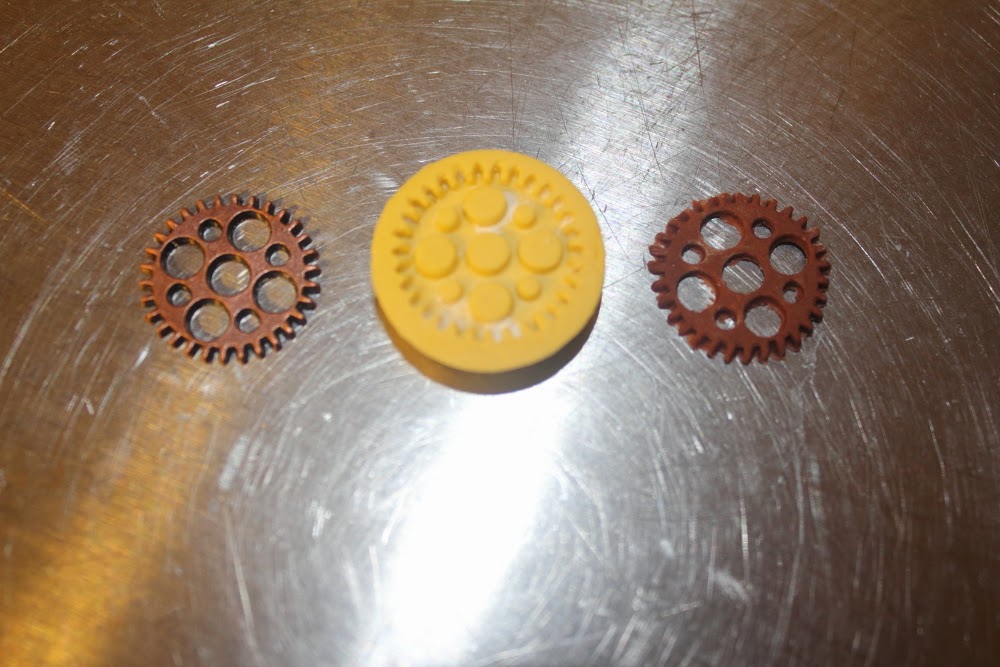 I started by buying some decorative gears from Amazon and making some custom molds.  In the above picture, you see the original metal gear, the mold I made, and one of the gum paste gears on the right.  I made the gears by gently spreading gum paste into the mold, and it was a bit trickier than I'd planned on.

I then made some templates for hands and numbers. 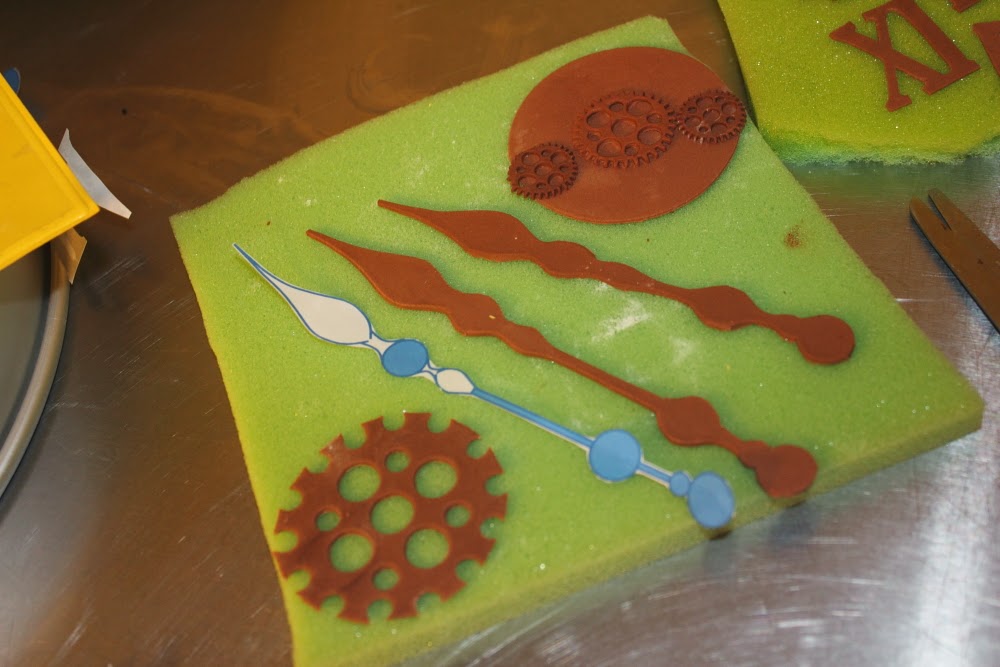 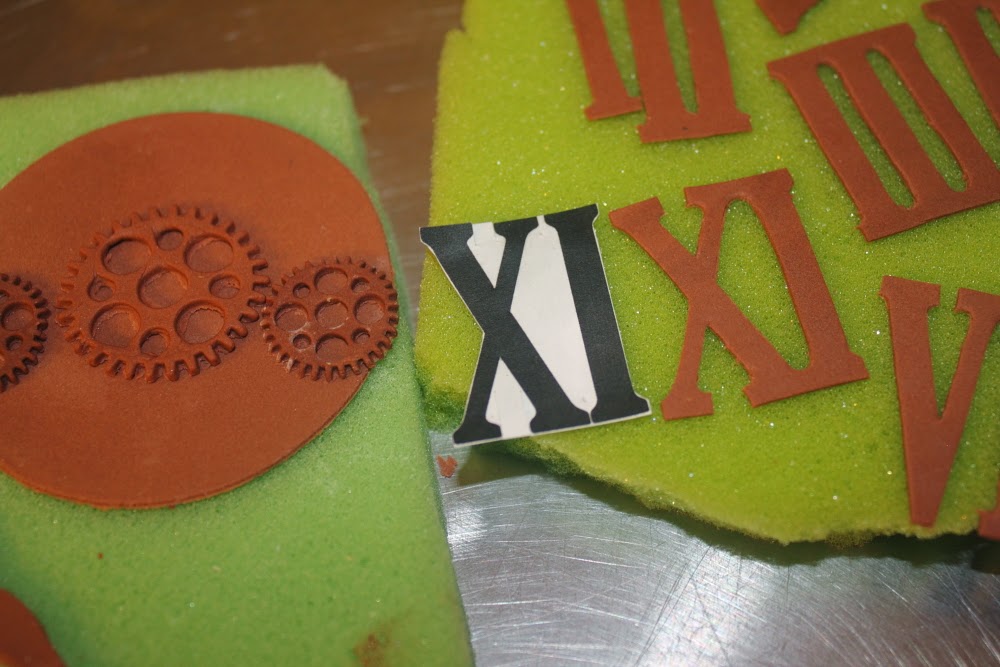 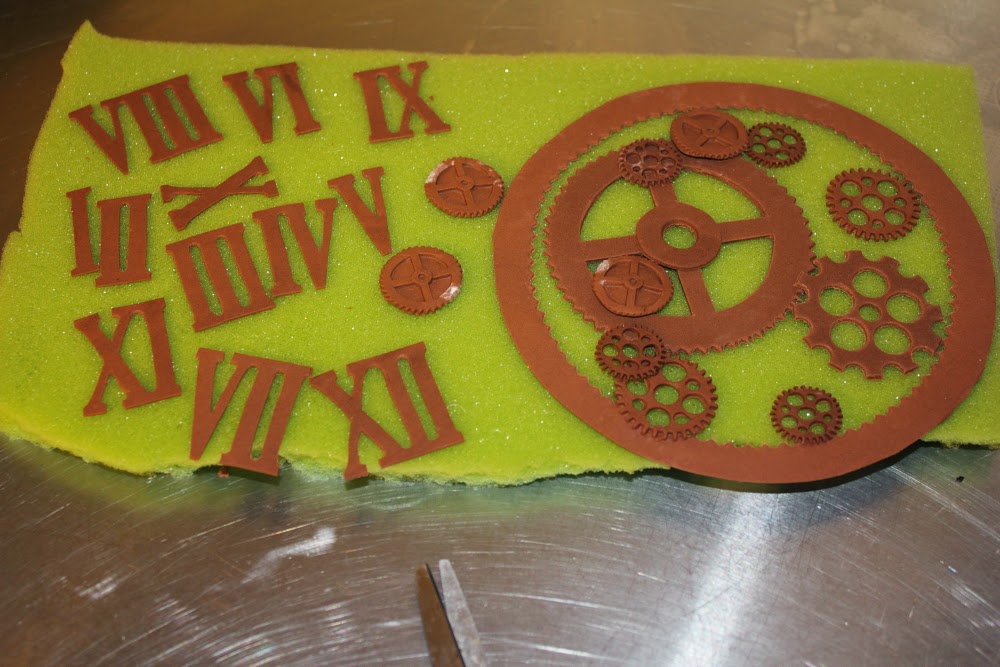 I used a mixture of gold and bronze luster dusts with fan brushes to give the pieces their final coloration. 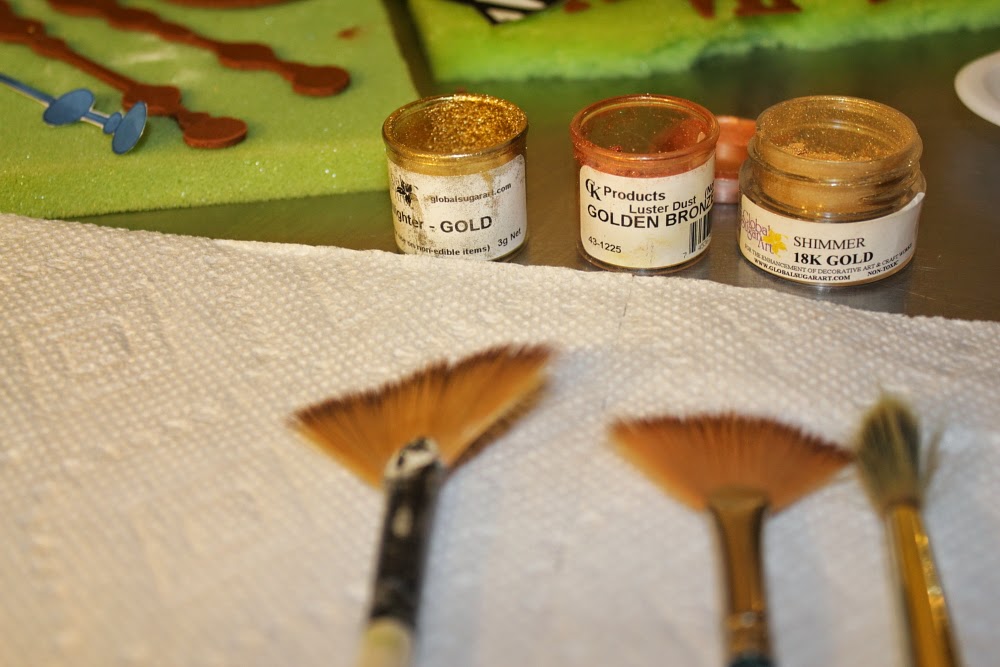 Then got to putting the cake together!
It is a chocolate cake iced in vanilla buttercream (always a fun challenge): 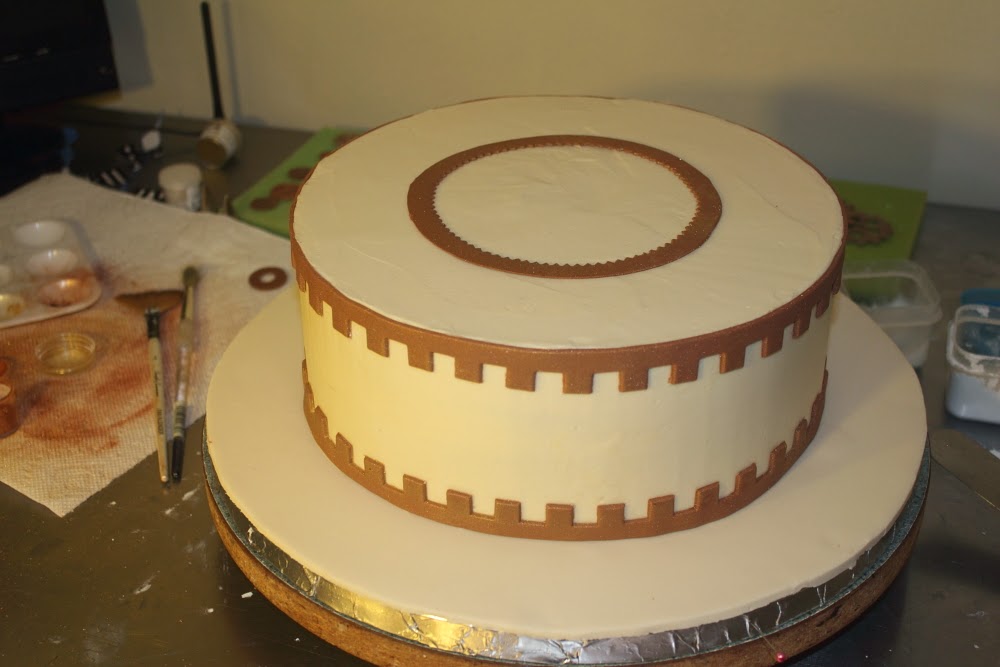 To make the border, I used the FMM border cutter set: 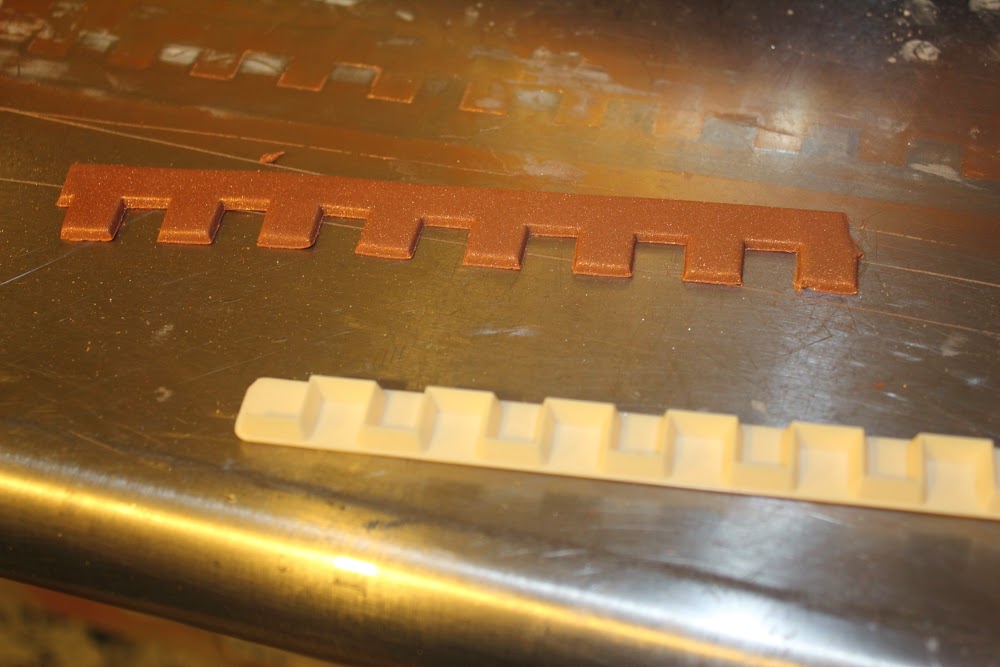 And finished with luster powder.  Then I just had to configure the gears! 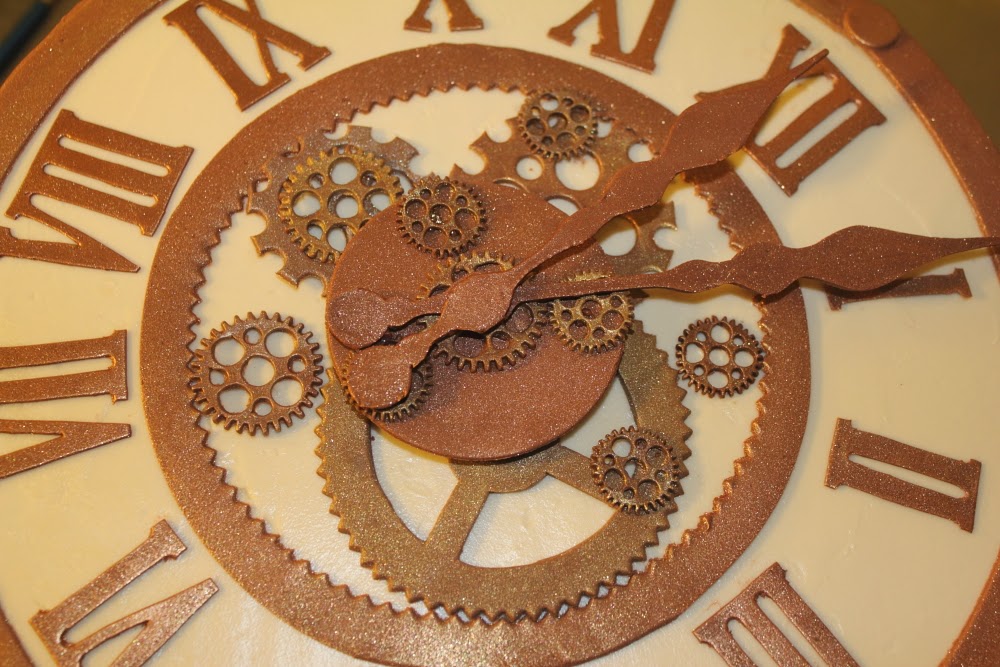 Of course one of the engineers at the reception asked if the clock was functional.  :oP  But most seemed to appreciate the tenure clock concept.  And really appreciated liqueur-soaked chocolate cake with chocolate truffle filling. 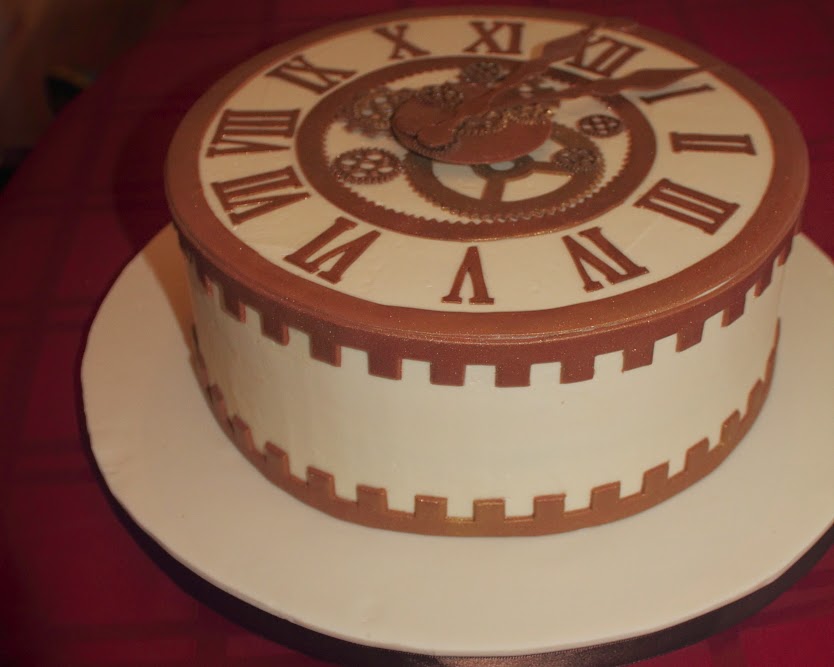 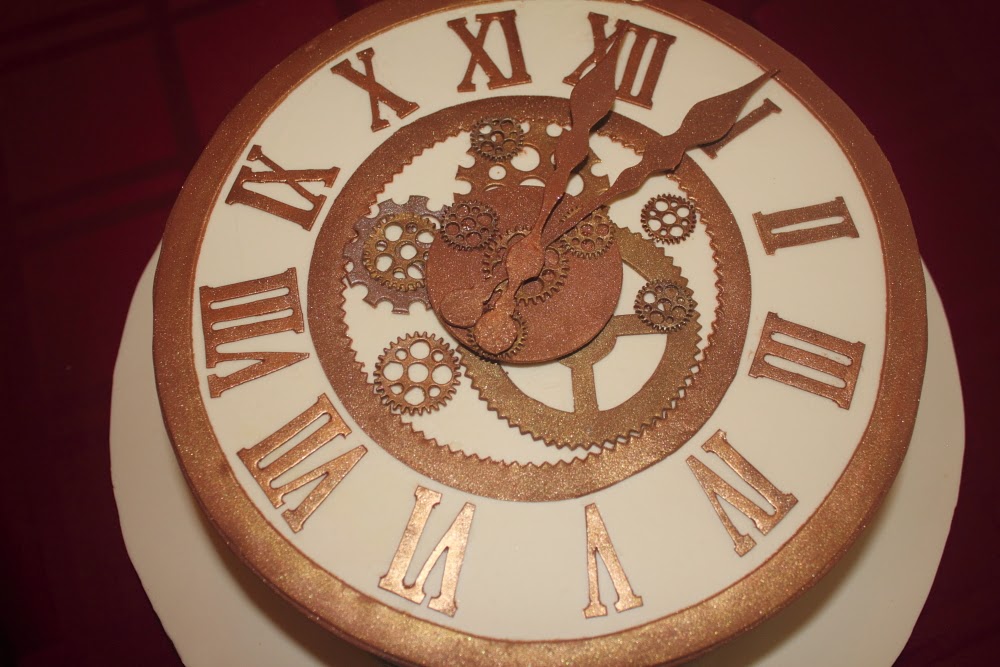 So there it is!  The tenure clock!  Congratulations to my fabulous fiance and his colleagues who were awarded tenure this spring. :)