Portal Cake-- It's All Lies. 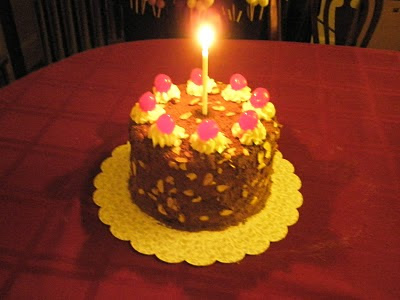 There was another masters defense in my lab today, a.k.a. another cake making opportunity!  A couple of the guys in my lab (including this one) are really into gaming-- hey, we're all engineers.  Even I'm a bit of a gamer in certain respects...

Anyway, there is a PC game called Portal, which is very popular and supposedly very good.  Cake is a common theme throughout the game, and is particularly important in the ending.  There's even a song about it, and it is the last thing you see at the end of the game. 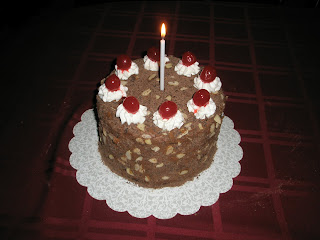 I knew he'd appreciate a replica of the Portal Cake.  I baked a chocolate cake, and made a chocolate/mocha buttercream.

Since I didn't have to do any piping, and the color didn't matter, I made a double batch of buttercream containing real butter (as opposed to just shortening) and real vanilla extract (not clear vanilla extract).  Here is the recipe I used (double batch):
Cream the butter and shortening, add vanilla.  Gradually add sugar, one cup at a time, mixing well on medium speed.  After adding all sugar, icing will be a bit dry; add milk.  Mix well till creamy.

This recipe tastes much better than my class recipe, which only calls for shortening, sugar, flavorings, water, and meringue powder.  However, the class recipe keeps almost indefinitely and is good for piping.  Since I wasn't concerned about piping, I added a little less sugar so it was less stiff and more creamy.

I used about 2 cups of the icing and mixed it with a small batch of ganache and espresso liqueur to make the chocolate/ mocha flavored icing that I used to ice and fill this cake. 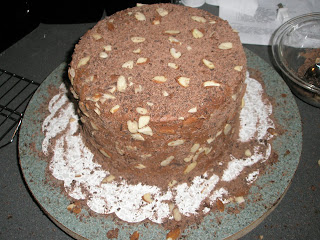 Here you can see the mess I was making-- after I iced the cake, I covered it with grated chocolate (literally, I grated a Ghirardelli bar) and some sliced almonds.  The key with this icing was to work quickly-- it was lovely and soft initially but as the chocolate hardens, it gets harder to work with, and harder for anything to stick to it...

Anyway, I covered the cake with the shavings just using my hands and making a mess.  After I was done, I swept away the excess. 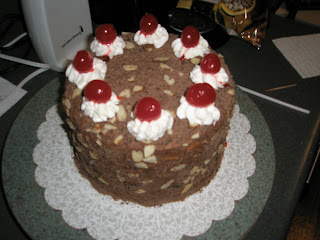 For the top, I piped some of the buttercream that I hadn't mixed with the chocolate using tip 2C, then added a jumbo maraschino cherry to each dollop.

To finish, I added the iconic candle. 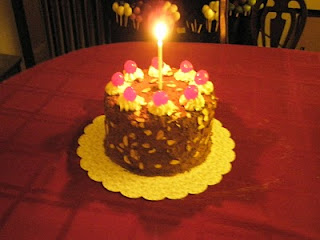 This cake was fairly simple to make, and very tasty.  I think the icing is my favorite so far (and my advisor's...) :)

I have this theory that chocolate ganache causes cakes to dry out some, because I feel like I have a hard time with cakes crumbling when they contain ganache/ chocolate icings rather than simply buttercream.  This cake crumbled a little when I was cutting it, but was still moist to taste.  I may try glazing my cakes in the future if I plan to use a ganache or ganache based icing.  On the other hand, the bottom tier of my birthday cake didn't crumble at all, and it had a similar icing on it.  Maybe that recipe was just more moist to begin with, though.

Anyway, if you need a quick, effective, and tasty cake, or have a friend who's a gamer, I'm sure you could make your own version of the Portal Cake! :) 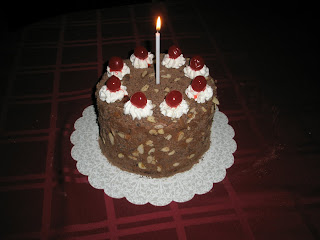