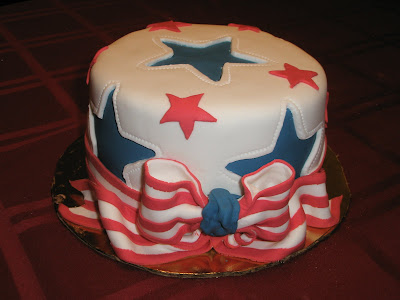 This little 6" display of patriotism is actually going to be traveling to NJ with me tomorrow, packed precariously in an impeccably sized tupperware with some foam padding.  I'll let you know how it goes...

Anyway, my parents were complaining that they haven't gotten to sample my cake, so I made up this little guy with the intention of bringing it home with me for the long holiday weekend.  At the same time, even though it was a little rushed to finish it, I wanted to experiment with a couple of technqiues. 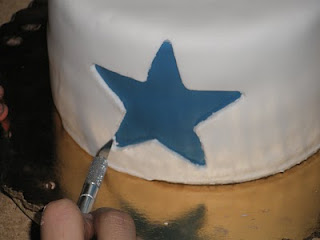 I need to ask you to ignore how bad the fondant looks on the sides-- I didn't have time to do all of my impeccable smoothing of the buttercream underneath, and there's an awkward cardboard situation going on.  Anyway, enough excuses.  I covered the cake in a thin layer of blue fondant, followed by a layer of white.  Then, I used a star cookie cutter as a guide and carefully cut out stars in the whit layer only using an X-acto knife.  I think it's a neat idea, but I'm not sure it's worth the extra effort... jury is still out on that one. :) 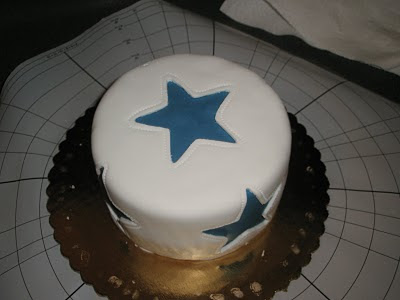 I cut out a total of five stars and added some stitching around the outside, giving kind of a patchwork overlay effect.

The next thing I wanted to try was a striped fondant ribbon (note that it's significantly more work than a plain one.) 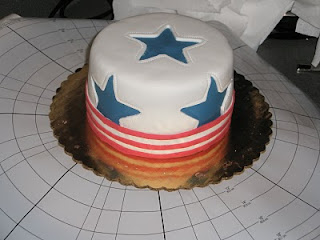 It  kinda looks like American bacon... don't you think?? :)   At least it covers up the messy part of the fondant.

Finally, I added a bow, striped but with a blue center, and some hand cut-out red stars.  It's times like these I really wish I had more than one size of star cutter.  And why do five point stars have to be so hard to draw evenly anyway??? 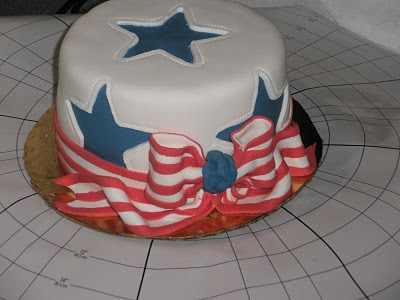 The bow.  I think it needs white stars on the middle part, but I didn't have all night. :)
I'm pretty happy with the stripes.  I think I might have done the striping/ bow a little differently if I had it to do over again, but not bad for a first attempt. 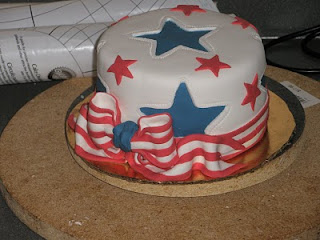 The cake board is sort of a hack, but we'll let it slide.
Oh and I didn't figure out for months that my turntable is reversible-- see how it has a small side and a big side??  NEVER occurred to me to flip it over until I heard or read that the thing was reversible. 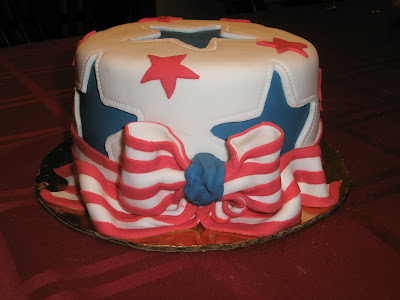 Now let the fireworks begin!  :)  And hope this poor little cake survives the plane ride...
Posted by Roxanne at 7:51 PM