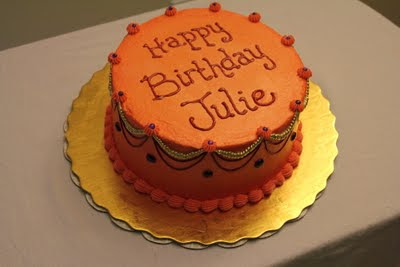 I was asked to make a 30th birthday cake for a fabulous lady who's favorite color was orange...
It was an interesting challenge to come up with a theme and color scheme that incorporated orange that would not look like Halloween, so here's what I came up with. 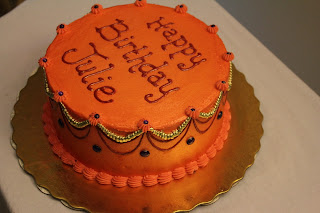 First of all, this was my first gluten-free cake, so I learned a few things, like don't use Pam Baking (with flour in it!) when you're making such a cake. FYI.

I covered the cake in Swiss Meringue Buttercream, which I colored orange.  However, I found that it was hard to smooth it and keep the color consistent, so I ended up airbrushing it with some orange and pink pearl shimmer to even it out.   I piped the scrolls with white royal icing and painted them gold, then the strings and letters I piped with burgundy royal icing.  However, it was super humid when I made this cake and this was the first time I ever saw color start to run.  If I had it to do over again, I would have let the cake thaw from the fridge longer (because it was sweating a little) and let the airbrush color dry longer before I had done the piping.  I finished the design with buttercream borders and purple isomalt gems.

My friend who requested this cake said they ate the whole thing, so I hope it was tasty! :)
Posted by Roxanne at 6:38 PM