In the third week of Wilton Course 3 we learned 4 new royal icing flowers, all of which involved the lily nail set.  Unfortunately, I wasn't thrilled with the consistency of my royal icing.  I didn't want my tips to clog or my hands to break, so I made it a little on the thin side.  Since I was in class, I just had to deal with it...
We first learned the lily: 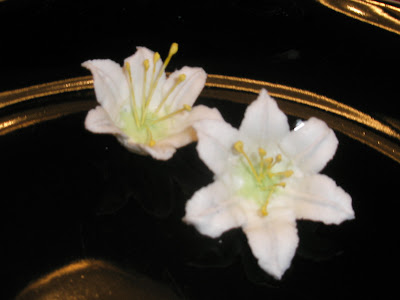 Here I think my white icing was a little stiff, but there was a tiny bit of green in the center that was too soft, which made it hard to keep the stamens where I wanted them.  But still, I think they're a very pretty flower.  The stamen are pre-purchased and not edible, though not toxic-- they're made from paper and royal icing.

Next, we learned the poinsettia: 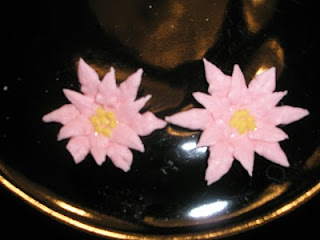 The photo quality isn't great, and a couple of my petals broke in transit, but you get the idea.  I don't think these really look like poinsettia, but whatever! :)

Next we learned the petunia: 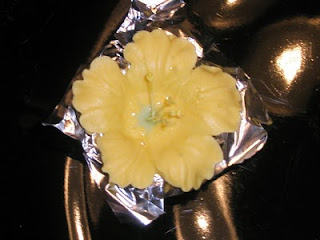 I really like this flower, though I think it looks more like a hibiscus with the wrong stamen... I had to leave this one in the foil because it wasn't ready to be removed.  My icing was way too soft on this one and especially the next one, the morning glory: You can see it kinda lost its shape because the icing was so soft.  And it shifted a little in transit, which is why it's lopsided.  Fortunately, if I ever make these for a cake, I'll be at home and can have more control over these factors.  :)

As a preview for what's coming this week, I've been working on fondant roses to go on my tiered cake that we'll make this Thursday.  These have been very time consuming-- I've probably worked on them for 10+ hrs to make about 40 roses... and they're still not done!  And not all are full sized!

Here are some full sized ones: 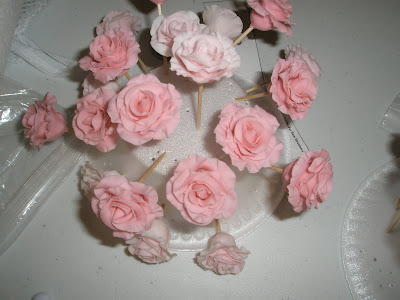 Mostly medium and some rosebuds: 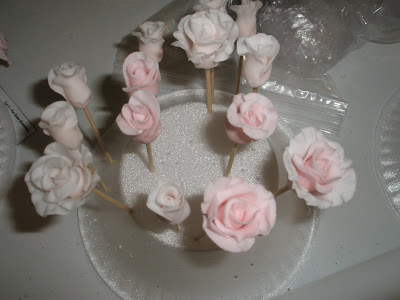 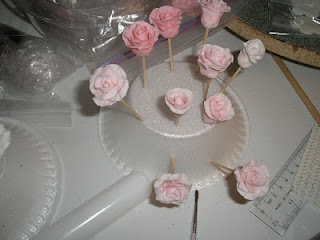 Just like a lot of stuff in the confectionery world, it's a lot of work!  I hope the cake comes out good...
Posted by Roxanne at 3:00 PM