Scenic Groom's Cake with a Bear 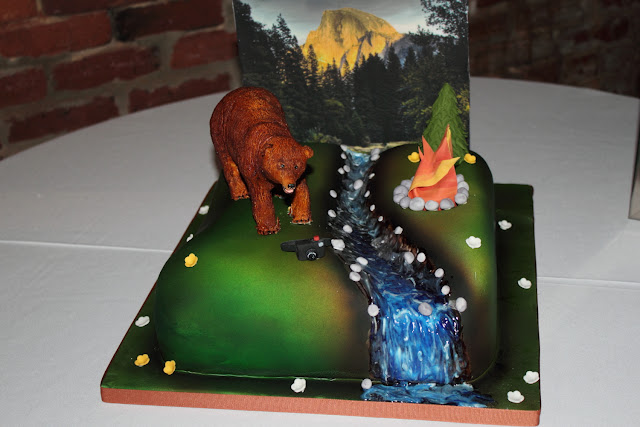 This cake was so much fun to design and execute.  Of course it had its share of frustrations, but we'll get to that.

This cake was designed by the bride and me as a surprise for her groom.  She gave me some input about things the groom liked-- photography, camping, and the picture that she wanted to somehow incorporate.  I came up with the idea of doing a scene with a bear, which was funny because the groom really had had a bear come through a camp site once.  The bear was standing by an abandoned camera, assuming that it's owner had either run away or been eaten by the bear-- you can choose your own adventure. ;)  I suggested using the photo as the backdrop for this scene with a camp fire and some landscaping.

So of course I drew all this up and then had to figure out how to actually do it.

It started with the build-a-bear workshop.  After looking at many pictures of grizzly bears, I had to figure out how to construct a structurally sound grizzly bear at an appropriate scale.  For this kind of sculpture, some interior structure is required.  To minimize weight, I used some styrofoam filler, and heavy gauge wire to prevent collapse.  Then, I started adding modeling chocolate, small pieces at a time: 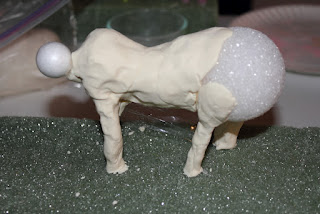 Not quite a bear yet: 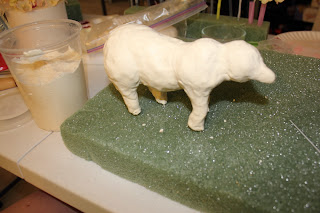 Some details are added, and the mouth opened: 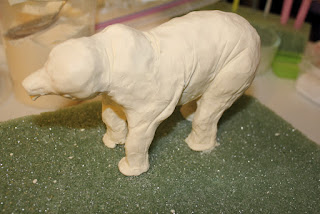 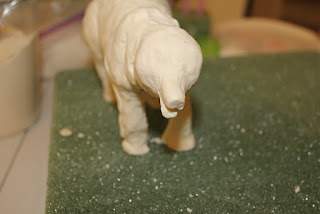 And the finished carving, after the fur is textured: 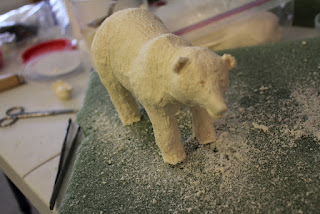 I really wanted to make sure the back of the bear looked proper as well. 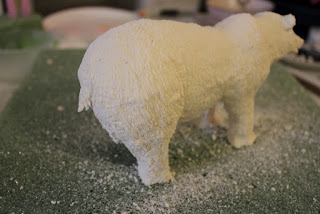 After airbrushing and painting, with the gum paste abandoned camera: 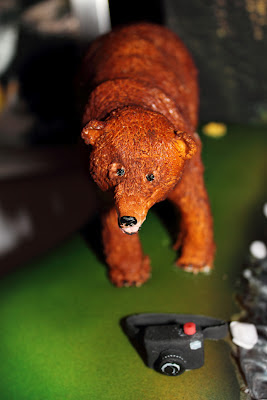 The cake itself was a 12" square chocolate cake with chambord syrup and espresso truffle filling.

I carved it to look like a landscape, covered in fondant, and airbrushed the landscape.

I also had to rig up a support system for the photo, which was an edible image mounted on a hardened gum paste plaque.  This is where the frustration really came in.  It was late Friday afternoon, I had worked till 2 AM the past few nights, and I knew I was going to be up late again.  Those moments can be very emotional for me-- I work alone, long hours, and when things don't come out the way I like them, it can be hard to stay motivated.  Fortunately, the mounting system was the back of the cake and couldn't really be seen or noticed, but I didn't have the plaque set up, so all I could do was stare at the flaws.

I felt better once I added the river water: 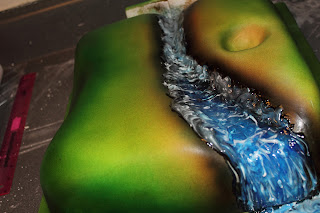 It's amazing what piping gel, blue gel food color, and royal icing can do.  The 'hole' in the cake was for the campfire.

Sometimes, when I think about cakes for a long time, I keep dreaming bigger.  Next thing I knew, I had a plan for implementing a flickering camp fire.  It didn't come out quite as bright as I was hoping.  But still, it flickered.  Actually, the trickier part was trying to get gum paste to look like fire... fire is sort of a weird substance.

Anyway, I finally assembled everything, fire, a pine tree, some rocks, some little flowers, and of course the bear and camera, with the gum paste plaque.  I traveled with everything assembled except for the plaque, which I set up on site.  The cake was displayed next to a print of the original inspiration photo taken by the groom, and a note from his bride.  I thought it was very sweet. 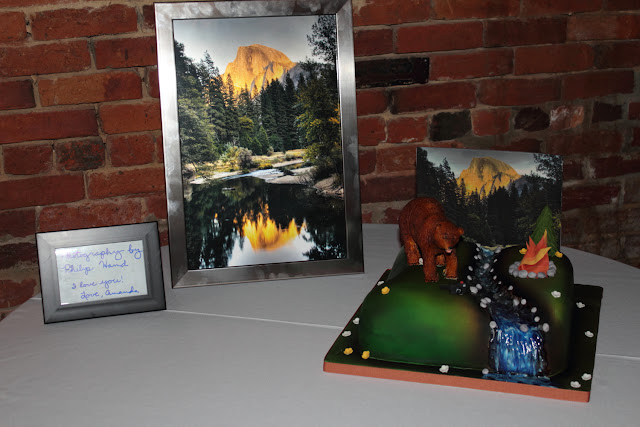 The groom, his family, and the bride were so excited about this cake, and seeing their reactions is what I probably enjoy the most about cake making.  Obviously I find great satisfaction in the creativity and artistry of cake decorating, but the long hours are justified when I see a client's joy, and when I can inspire others to take on  new challenges. 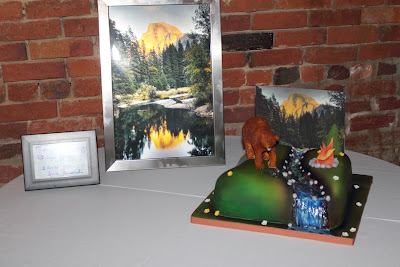 Again, congratulations Philip and Amanda!  I'm so glad I could be a part of your special day.

And I hope you all enjoyed today's build-a-bear story. :)
Posted by Roxanne at 8:06 PM