Since I'm sure your blood sugar is getting low from lack of cake blogging (I know mine is), I thought I'd write a little post to recap my class from last night, even though I won't really have any new pictures till next week.

This was my first class in a 4 class series for Wilton Cake 2.  In this class, we were given some medium consistency buttercream to practice the techniques on a practice board.  Since I wiped away all of my work, I don't have any evidence for you to see.

We started off with the rosette, which I wasn't crazy about.  Then we reviewed the shell border, and practiced the reverse shell.  I found I was a little dyslexic when it came to the reverse shell; when looking at the pattern on my practice sheet I found I went the opposite direction.  I guess you have to go the 'wrong' way first to loop around, much like a question mark.

Then we moved on to the rosebud.  This technique caused a lot of moaning and groaning in class.  After you pipe the first petal, you have to pipe the second such that it grabs the original petal and overlaps to create the twisting effect in the center.

We finished the class with the chrysanthemum.  We did ours with buttercream, and we had flower nail templates that we could cut out help regulate the size of the petals, as you see in the picture on the Wilton website.

Next week, we move into royal icing.  Royal icing is nice to work with because it dries hard-- harder than buttercream.  It is made with egg whites and powdered sugar or with meringue powder, water, and powdered sugar.  You can also add a little flavoring to it, if desired.  In the next two weeks, we'll be making royal icing flowers that we'll save to put on our cake that we'll make in the final class.  The final class cake will look a lot like the cake in my 2nd post: http://www.cakesbyroxanne.com/2010/01/next-cake-adventure.html. 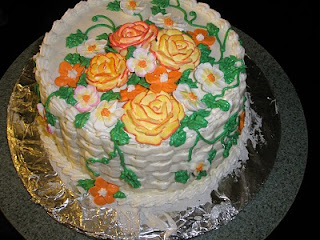 As you may recall, all of those flowers were made with royal icing as well. : )

Anyway, I may make another cake for fun this weekend-- maybe a valentines themed cake... I have a lot of techniques in mind that I'd like to try.  I've been reading Margaret Braun's Cakewalk, and have been wanting to try some of her piping work.  Also, I managed to secure a copy of Joseph Lambeth's book-- The Lambeth Method of Cake Decoration and Practical Pastries.  His piping work is nothing short of museum quality.  His techniques involve a lot of layering of intricate piping to create borders and designs that you just don't see anymore, except maybe from competition cakes.  It is likely that it would be too time consuming to pipe some of this stuff that it would be impossible for the cakes to be profitable in any commercial cake shop.  However, I think his book will be a very valuable learning tool.  Note: both of these books are somewhat rare-- I had trouble finding copies.  So if you're interested, keep an eye open in a local used book store, or hope that they print new editions soon...


Next week I'll be bringing home royal icing flowers from class, so I'll be sure to post pictures of those with my class recap.  :)
Posted by Roxanne at 8:32 PM