The Next Cake Adventure 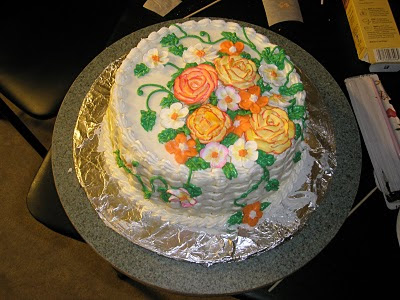 This cake was my second adventure in cake decoration.  This adventure had 3 parts:

This cake started because I wanted to try my hand at piping flowers.  For this experiment, I decided to use royal icing rather than buttercream.  While I believe many of these flowers could be created using buttercream, it can be finicky.  I'll dedicate a whole post to buttercream and royal icing in the future, but royal icing is great for piping detail work for a variety of reasons.  First, it's a simple recipe that can easily be whipped up in small batches (typically just egg white and powdered sugar, and maybe a touch of flavor extract) and it can be made very stiff or runny (by adding more or less powdered sugar).  It dries quickly when in contact with the air and dries hard like cement.  That means you can pipe onto parchment paper or wax paper, let your creations harden, and transfer them to your cake later with relative ease. Also, it won't break your jaw to eat it, and generally tastes sugary, like a heavier version of a meringue cookie. 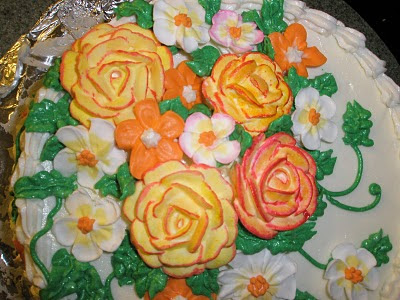 All of the flowers on my cake with the exception of the all over orange blossoms started off WHITE.  They were all piped using Wilton petal tips in royal icing on parchment squares on a flower nail.  It took some work to get the royal icing to the right consistency: at first it was too soft and the roses just kinda collapsed on themselves.  If you're using a hand mixer, it will feel like you're mixing cement.  Also, if you look in the bowl, see if and for how long the mix marks are retained after you turn off the mixer.  For piping flowers, you want the icing to retain those features and stay rough looking.  There are times you want it to be softer and self smoothing, but this is not one of them! The white blossoms were finished off with some orange royal icing dots using a  round tip, and the orange flowers were finished with a white buttercream center using a #18 star tip after they were placed on the cake.

The flowers were painted individually using gel food colors diluted with some lemon extract.  Color dilution can also be done using vodka or vanilla extract-- anything with a high alcohol content. Painting can be done with any 'food-safe' paintbrushes, i.e. brushes you haven't actually used to paint.

Once the flowers were all dried and painted (I gave them a full day to dry), I worked on assembling the cake.

The cake itself was made using the Classic Yellow Cake recipe from Sylvia Weinstock's Sweet Celebrations book.  This cake smelled AMAZING while it was baking.  It tasted pretty good too, but I think after smelling it for so long it wasn't as exciting as it might have been otherwise.

The buttercream is the Wilton recipe:   http://www.wilton.com/recipe/Buttercream-Icing

Something interesting to note is that not all shortening is created equal.  The first time I made buttercream, I purchased butter flavor Crisco, which is yellow colored!  The icing came out tasting good, but was more of an ivory color: 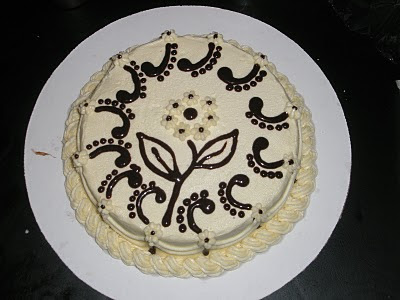 The cake in this picture was more an extension of my first cake-- a way to use up the remaining ganache (on the top), and a way to test out some home made buttercream.  You can see the ivory color due to the yellow crisco, but it still tasted good!

Beyond the butter flavor shortening, regular Crisco as well as certain store brands no longer contain trans fats.  For whatever reason, this affects the consistency of the frosting.  I found it was a little softer and less stable than I would have preferred.  In the south, Kroger's store brand shortening still contains trans fats, so I prefer to use that or a half and half mixture of no trans/ trans fat shortenings. 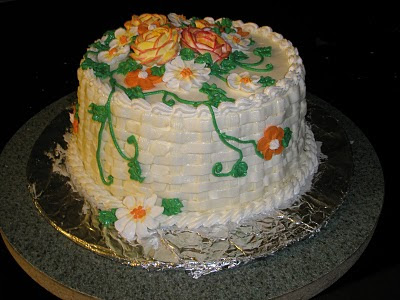 Before I iced this cake, I made the decision to cover the cake round with aluminum foil to avoid the spreading of grease onto the cardboard.  I don't really recommend this unless you buy the heavier/ bigger foil that is sold (quite expensively) at your cake supply stores.  Since the foil had a seam (I needed to use two pieces) it was harder to ice on the turn table.  My spatula kept getting caught on the foil seam.

Anyway, I filled this cake with butter cream, did a crumb coat, and then did a second smoother layer.  For those who don't know, a crumb coat is a thin layer of buttercream that is applied to the cake and allowed to solidify. (I like to let it harden in the fridge for a few minutes).  This layer traps any crumbs that stray from the cake.  Then a second layer is applied more meticulously and smoothed to (near) perfection.  Or so I try. :)

On this cake, I really wanted to try a basketweave.  This technique can be done using a variety of different tip combinations, and instructions are readily available on Wilton's website:  Basketweave

I then piped a basic rope border on the bottom using tip #18:   Rope

(Note: this one I needed to practice on parchment a few times.  I think the secret is to not really pipe a full 'S', but it's one of those things you should try before you just start on the cake.)

The top is a shell border using the same tip #18: Shell

Then, I simply stuck on my pre-made royal icing flowers.  For some of them, I piped on more significant amounts of buttercream for them to rest on to make them stand up more or angle more or whatever.  After putting the flowers where I wanted, I filled in the foliage with a leaf tip (e.g. #67) and some vines with a round tip, using green colored buttercream. 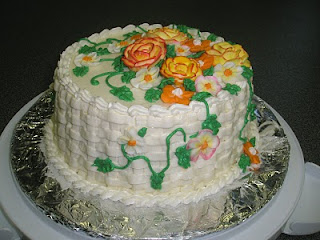