The Cake That Started It All 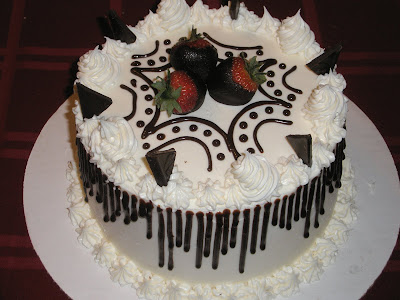 OK-- this wasn't the first cake that I'd EVER made, but it was the first one I took seriously.  It was made for my friend Stephanie, an office-mate who was moving.

The idea for this cake was an amalgamation of a chocolate cake I've ogled at my local grocery store and the cream puff cake that Buddy makes in honor of his late father on Cake Boss: Episode 2. 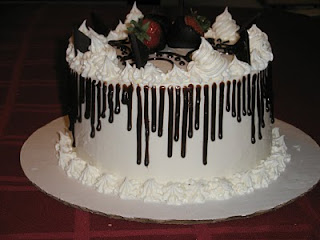 The chocolate triangles are a fairly common gimmick on grocery store chocolate cakes, but I think they're really effective!  I didn't want to hand make these triangles, so I carefully cut some Ghirardelli 72% cacao squares along the diagonal to create a similar effect. 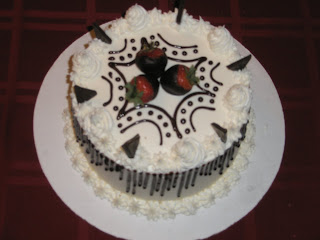 The great news about this cake: box chocolate cake mix, and white icing out of a can (I know, gasp).  BUT, for this cake I made a chocolate ganache to fill between the layers.  Ganache is like chocolate truffle filling-- recipes are everywhere.  Basically, you bring some heavy cream to a simmer and pour it over some semi-sweet chocolate chips in a mixing bowl.  Then you stir till all the chocolate is melted.  I added a splash of Kahlua for extra deliciousness.  I also layered some fresh strawberries on top of the ganache when I filled the cake.

I set aside some ganache and put it in a squeeze bottle (a small plastic bottle which can be found by the candy making supplies at your local Michael's or similar).  This is what I used to do the drizzles and the design on the top.

Also, this cake was made before I had invested in any real cake decorating supplies.  All the piping was done using a Farberware pastry bag set I found at the grocery store.

Here is the cake as I served it, surrounded by chocolate covered strawberries: 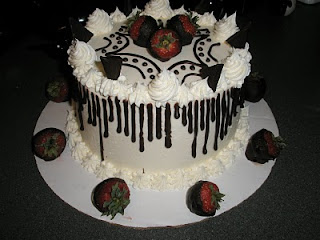 So the only supplies I had to buy for this cake (aside from the ingredients):

I already had a decent icing spatula on hand. :)