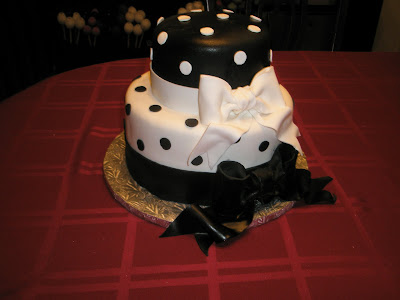 For my birthday cake, I decided to take on some new challenges.  I wanted to do a tiered cake, and I wanted to cover it in fondant.  Fortunately, I shared a birthday celebration with two of my classmates at Georgia Tech, so there was a nice party for this cake to make its debut... and a lot of friends armed with forks!  :)

This cake took a fair bit of planning.  If you read my previous post, you'll recall I made 2 6" funfetti cakes in conjunction with my cupcakes for last week's class.  I froze these until this past Thursday-- those made up my top tier. 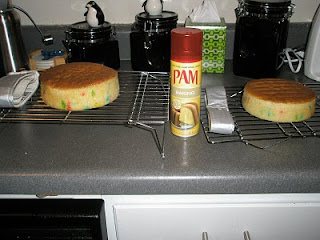 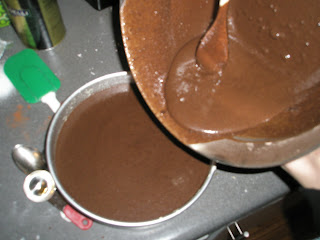 The recipe was fairly simple as scratch recipes go.  The only ingredients that I didn't have on hand already were buttermilk and cocoa powder.  It called for 1 1/2 c of cocoa powder, so I used one cup of Ghirardelli cocoa powder and 1/2 c of Hershey's special dark cocoa powder. 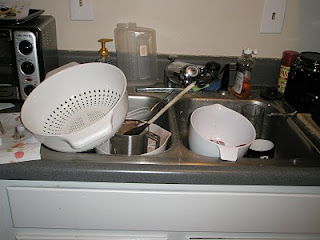 Carnage.
As my cakes baked, I watched them closely.  For a while, I thought we were going to be okay overflow wise, but a few minutes later, something bubbled and overflowed.  The cakes dripped onto the pizza stone in the bottom of my oven, and a little batter got on the element.  Therefore, instead of smelling chocolate cake for the last 30 mins, I smelled burning.  Oh well-- that's what I get for ignoring the whole 10" pan thing.
Regardless, the cakes came out beautiful. 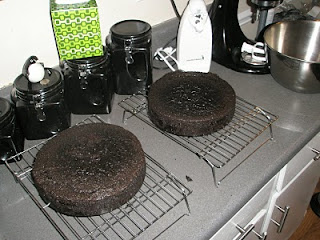 Margaret Braun claims that these cakes are moist, delicious, and 'a dream to work with.'  I don't know about the last part-- the cakes were very soft, so crumbs came off easily during the icing process.  Fortunately, I was covering them in fondant anyway, but I don't think these cakes would be carve-able, for example.  Maybe if I had cooked them an extra 5 mins, but the crumb was pretty fine.
Thursday night, I made the mocha buttercream.  I had already made a batch of regular white buttercream over the weekend for class, and I had made extra.  To make the mocha buttercream, I used about 2 c of regular white buttercream, a small batch of ganache (6 oz choc chips + 1/2 c cream), and a couple tablespoons of strong instant coffee, plus some kahlua.  It came out DELICIOUS.
Friday, my plan was to ice and cover the cakes.  I didn't think this would take nearly as long as it did...
I knew the cakes needed to be filled and dirty iced (a layer of buttercream that goes under the fondant to make it stick) before applying the fondant.  So I placed the small layer on a 6" round, iced and filled it with white buttercream, and stuck it in the fridge.  Then, I placed the chocolate cake on a 9" round and iced/ filled it with the mocha buttercream. 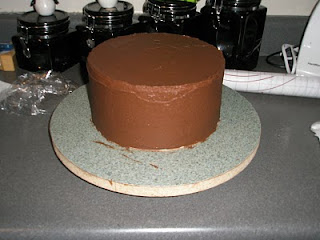 For whatever reason, I decided to start by covering the larger cake first.  I left this one out (rather than putting it in the fridge) because I wanted the frosting to stay a little sticky.
I don't have any pictures of the next part of this process, unfortunately, because I was hurrying a lot and was doing a fair bit of swearing.
I was using Satin Ice fondant

(which tastes pretty good, by the way), so I went to their website to see some of their how-to videos.  I watched Ron Ben-Israel cover a cake in what seemed to be 2 minutes (rolling the fondant out by hand, not using a sheeter), so I wasn't prepared for the magnitude of my next task.
I knew I needed 17+" diameter of fondant to cover the 9" cake, since it was a full 4" tall.  I grabbed close to 2 lb of white fondant, painstakingly kneaded it (though maybe not enough), and started rolling it out on my pastry mat.  And I rolled.  And rolled. With my normal kitchen rolling pin, I rolled.  It must've been 10-20 mins and I noticed my wrists had cramped and I was in pain-- but I had to keep rolling.  I could sense the edges drying out, and I still had inches to go.  And I rolled and rolled and rolled.  About 30 mins later I had met my size constraint, but couldn't move my wrists.  I attempted to roll the fondant onto the rolling pin to transfer it to the cake, only to realize the cake wasn't where I wanted it, and I dropped it.  Perfect.  I marred it a little picking it back up and just threw it onto the cake.  I started smoothing it with my Wilton fondant smoother, but between the stiffness at the edges and my lack of a good process, there were some tears along the bottom edges as I attempted to get the wrinkles out.
And as I ran my smoother over the tears in the fondant, I conveniently smudged the chocolatey frosting on my lovely white fondant.  You can imagine I had some choice words.
I finally got the cake covered and trimmed the fondant, and had to just leave a few holes.  Fortunately, the were near the bottom of the cake, and I knew I could cover most of them.  But I know for a fact I need a way to roll out fondant faster-- at least a bigger rolling pin.  Maybe I'll take a page out of Ron Ben-Israel's book and buy a sizable piece of PVC pipe to be my fondant rolling pin.
I covered the small cake later Friday night.  This one was much less dramatic, but since the frosting had crusted, it was a little harder to get it to stick.  This made it a little easier not to smudge the frosting all over the place, however.  I will have to find a happy medium. 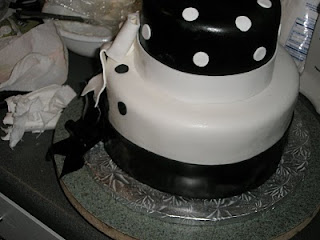 I finished the decorating Saturday morning.  I placed the white cake on a silver cake drum with some buttercream under it, and inserted 4 drinking straws cut to height in a diamond shape in the center of the cake to support the weight of the top tier.  I put some more buttercream in the middle of that cake, and put on the top tier. 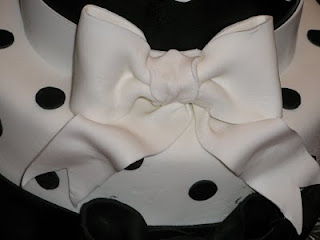 to cut different widths for the ribbon going around the cakes and the bows.  After the bows were done, I cut out the polka dots using a circular cutter.  I applied my decorations using water/ moisture, or buttercream, or royal icing, depending on how strong an adhesive I needed and what I had around in an appropriate color. 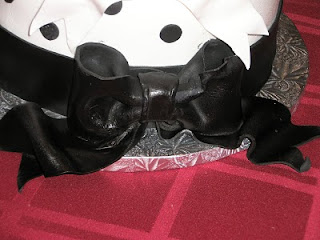 To give the cakes a nice shiny finish and to get rid of any remaining powdered sugar (which is used when you roll out the fondant to prevent sticking-- it's very obvious on the black fondant), I steamed the cakes with a little steamer I bought at Sears.  I had seen Buddy do this on Cake Boss, and it's very effective.  You can buy a small steamer for about $30-- a worthwhile investment if you plan to work with colored fondant. 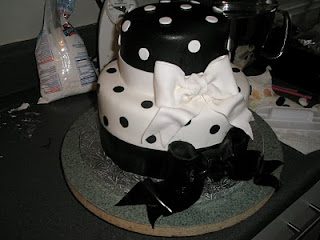 Overall, I was really pleased with the outcome. 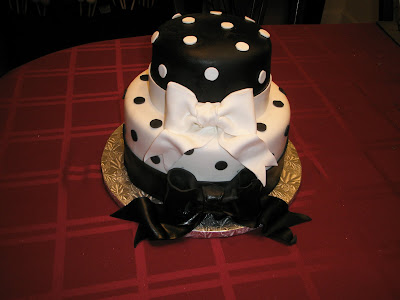 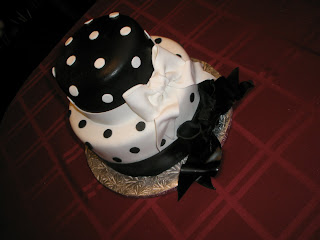 So how'd it taste? 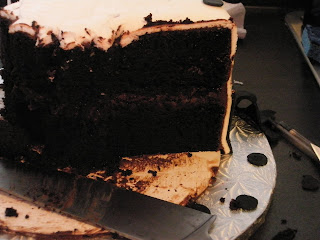 The chocolate cake was moist and delicious.  And chocolatey.  I've found that some chocolate cakes are moist but leave me wanting more chocolate.  This one was really good, and went perfectly with the mocha buttercream.  And, only a few people left over the fondant (which means it must've tasted pretty good too.) 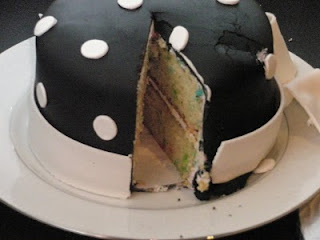 I thought this cake looked cute with the Funfetti.
Anyway, the cake was a big success.  And now somehow I have to make yet another cake and more buttercream for my class on Tuesday :oP   Cake Overload.  Hope my co-workers are hungry for cake...
Posted by Roxanne at 12:23 PM